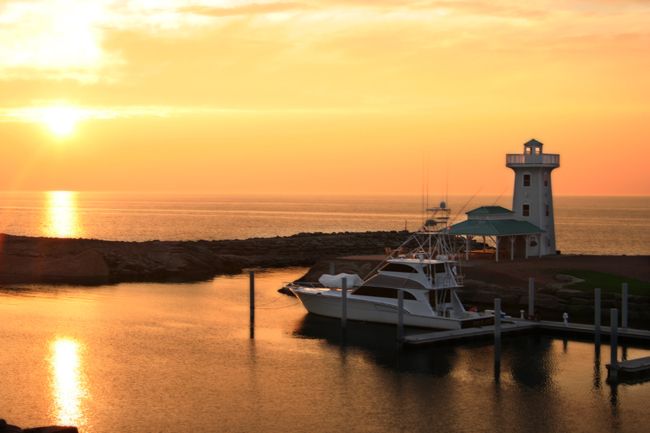 The Ghost Ship of the Northumberland Strait

The ghost ship is usually described as a three- or four-masted ship. Sometimes it’s a square-rigger, other times a top-sail schooner. Sometimes just the rigging is on fire, other times it’s burning end-to-end. Reports frequently mention men running about the deck. One report in the Charlottetown Guardian specifically mentions “people and dogs”. The majority of accounts have the ship sailing north or northeast, very quickly. A typical account can be found in Folklore Prince Edward Island by Sterling Ramsay:

“Late one evening, approaching dusk, a ship [was] sighted in the harbour which appeared to be in peril…. Some distance out in the channel was what appeared to be a large three masted sailing vessel ablaze from bow to stem. A group of men boarded a small boat and rowed toward the flaming ship, in hopes of rescuing as many of her crew as possible. While they were still some distance from the craft, it disappeared into the mist and appeared to vanish completely.”

When Is It Spotted?

The ghost ship has appeared in all seasons, but spring and fall seem to be the most common times for spotting her. According to Edward D. Ives, writing in Midwest Folklore, it has even appeared in the dead of winter when the Strait is icebound. Most sightings are at night, approaching dusk, or in the hour before daybreak. The ghost ship has long been associated with the approach of a storm.

The ghost ship has been accounted for in print for more than a century, with New Brunswick scientist William Francis Ganong writing a sober-minded account of it in the 1905 Bulletin of the Natural History Society of New Brunswick:

“In its usual form, the light is roughly hemispherical. It has its flat side to the water and at times it simply glows without much change of form, but at other times it rises into slender moving columns, giving rise to an appearance capable of interpretation as the flaming rigging of a ship, its vibrating and dancing movements increasing the illusion . . . its origin is probably electrical.”

More fanciful accounts of the ghost ship are attested to in Roland H. Sherwood’s 1948 Story Parade, a book about the legends of the Maritimes, in which he claims the ship has been seen for at least two hundred years. A fairly long description can also ben found in Helen Champion’s travel book, Over on the Island, published in 1939. These two books seem to have built up the popularity of the ship, and the ghost ship started to be accounted for regularly in newspapers from the fifties onwards. Sherwood even returned to the subject in his 1975 book Phantom Ship of Northumberland Strait and Other Mysteries of the Sea.

Perhaps unsurprisingly, the ghost ship has been explained a number of different ways.

Along the New Brunswick coast, it’s called the John Craig Light, after a ship wrecked off Shippigan Island.

Other New Brunswickers consider it to be the ghost of the Colbum, lost during a storm in 1838.

It’s also been called the ghost of the ship Isabella, which departed in 1868 for South America. Last spotted by the lighthouse keeper at Amet Island, it was never seen again.

The ghost ship is sometimes considered the remnants of a pleasure craft or pirate ship set ablaze during a drunken brawl below deck. If the storyteller prefers the pirate ship interpretation, it’s nearly always associated with Captain Kidd, who was executed (perhaps unjustly) for piracy in 1701.

It’s also been called the ghost of a ship bound for Quebec blown off course in a storm, struck by lightening, and burned to the water with the loss of all hands.

In Pictou, the ghost ship is sometimes considered to be a ship bound for Scotland but never heard from again.

There are three very common explanations for the ghost ship. The first is St Elmo’s fire, which is when little bursts of electricity are discharged from pointed objects when the atmosphere has become heavily charged—for example, from the mast and spars of a ship when an electrical storm is brewing. It’s rare and these days most easily seen from an aircraft.

Witnesses may also be seeing a form of fata morgana, which is a complex mirage. When a distinct band of warm air settles atop a distinct band of cool air, rays of light are bent as they pass through the different temperatures, acting like a refracting lens. Objects viewed through a fata morgana can appear to be shimmering, flip upside-down, appear to fly, or be seen in great detail at a distance. Indeed, on certain calm days when the weather is just right, the shore of Prince Edward Island can be seen in surprising detail from the Northumberland Shore. It should also be noted that fata morgana is considered the most likely explanation for that other famous ghost ship, the Flying Dutchman.

The third explanation is perhaps the most simple. Dark, foggy nights, especially just before a storm, can play tricks on people’s eyes and the imagination fills in the rest.

The ghost ship continues to be spotted to this day, occasionally making the news but more frequently attested to by word of mouth. It’s even been made into a stamp by Canada Post. If you want your chance to spot this legendary phantom vessel, take up a post on the Northumberland shore an hour before sunset, in the spring or fall, and see what happens. You might be surprised.

When you spend your Nova Scotia Staycation at Fox Harb’r Resort, enjoy long walks or runs on our 5 KM seaside Fox Trot Trail. And keep an eye out for the ghost ship!